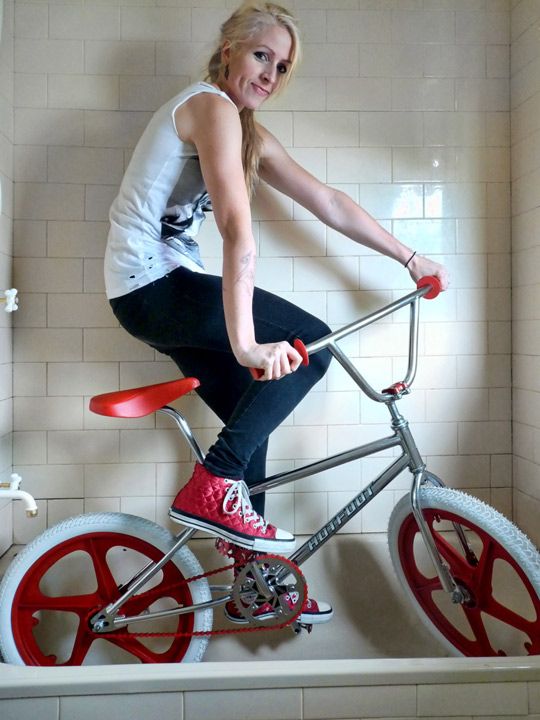 Q: What is BMX to you? Not everyone rides parks or dreams of backflips right?
A: It's the next best thing to having wings. It's freedom, it's the secret to perpetual youth, and it's unadulterated cool. Building old school BMX is a creative medium, just a different type of canvas. Regardless of how much I love what I do, and how great my day in the studio was, putting the pencil or brush down and going for a roll is always is always something I crave. 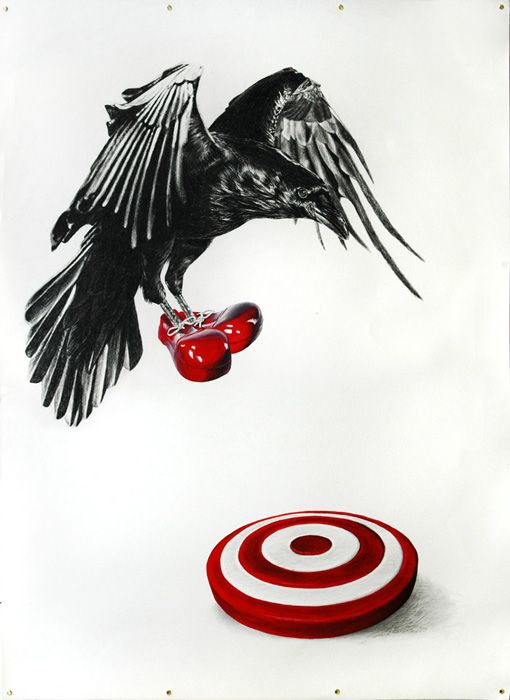 Q: As a creative person where do ideas come from? Some say there is no such thing as a unique idea and we reinterpret the same ones on different levels.
A: I'm a big fan of Austin Kleon's 'Steal Like An Artist' manifesto. We're in an age of visual excess, so appropriation of ideas is unavoidable. Even if you think you're being original, someone's probably done it before. So it's what you do with it that counts, being brilliant is the new unique. My ideas come from every direction; from pop culture, art history, dreams, contradictions, people watching, social media, travel, staring at the sky, everyday life, and the absurdity of modern politics.

Q: BMX Bandits (1983) was filmed in Australia so it was not too far from you as a kid in New Zealand. Did it have an impact on you and your friends at all?
A: I was a bit young, and lived a bit too far from any movie theatres, to know about BMX Bandits when it first came out. 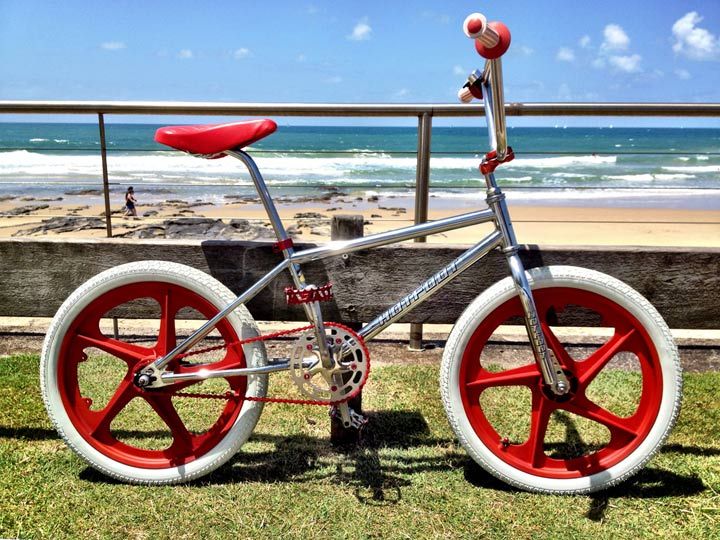 I actually never saw it until recently, it's hilarious! Steel Riders (NZ TV series), went to air in New Zealand in 1987 the same year I got my first BMX, and I remember going nuts over that show. It was awesome.

Q: What is it like to make album covers as part of your living? What is the process of coming up with an image that encapsulates the music within?
A: It has to be one of the coolest job ever. I get to play with cool toys, let my imagination run wild, draw cool stuff, make cool stuff, and get paid for it. There are deadlines and occasional stresses, but the fun factor makes it worth it. 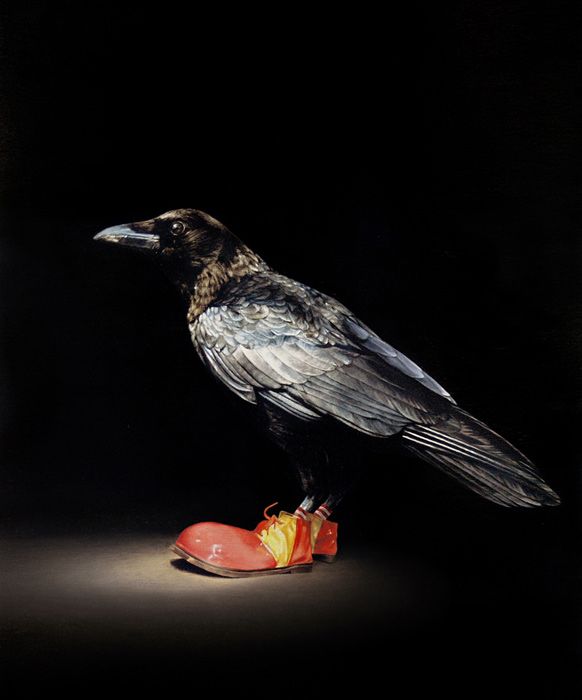 Most of the bands and labels I design for let me have free rein after I meet with them and hear the music. The only things I really need are a copy of the record (even just mixes), and a list of their favourite album covers of all time, so I can get inside their aesthetic.

Q: To you, is there a best BMX bike ever out there?
A: 1986 Healing Freestyler. It was a Kiwi bike and my first BMX. Together we survived some epic farm tracks, equally as epic wipe outs, some mean tricks and annoyed the hell out of my parents by constantly carving up the driveway in the process creating a skid long enough for a Guinness World Record. 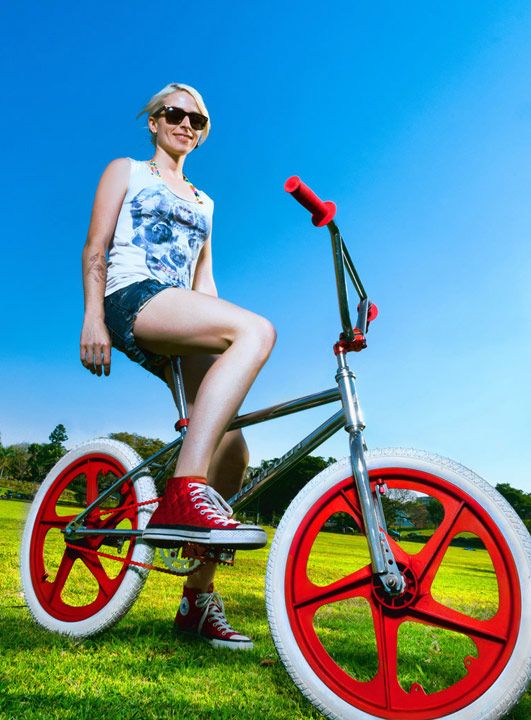 Q: With your band, Medollic, are you happy to go the digital self publishing route as opposed to dealing with a label? The perfect setup would be self publishing with the marketing budget if a label.
A: For a band the perfect set up is always to have a bigger budget! But we're extremely fortunate that James North (our guitarist/bassist/keyboardist) is a producer and runs an impressive recording studio, so studio time is free which is a big head start. We dig the creative control we have being self published, and the direct relationship with our fans. With our first album we turned down two offers from labels in the USA due to sneaky contractual clauses about ownership and exclusivity, so at this point we're happy heading into recording our sophomore release with the reins still firmly in our hands. 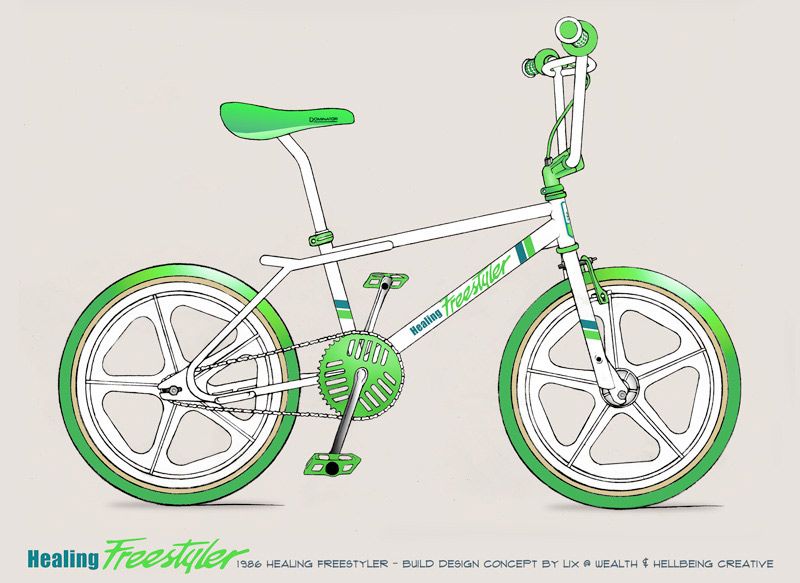 Q: What BMX related projects are you working on right now?
A: Building a pimped out '86 Healing Freestyler! I let my original one go in a moment of teenage stupidity in the early 90s, but recently managed to track down frame and forks from an awesome dude in Wellington, NZ. This is going to be an epic re-build project, upping the factory spec on pretty much everything. There seems to be only a handful of these frames that survived so I'm stoked to have got my hands on one. 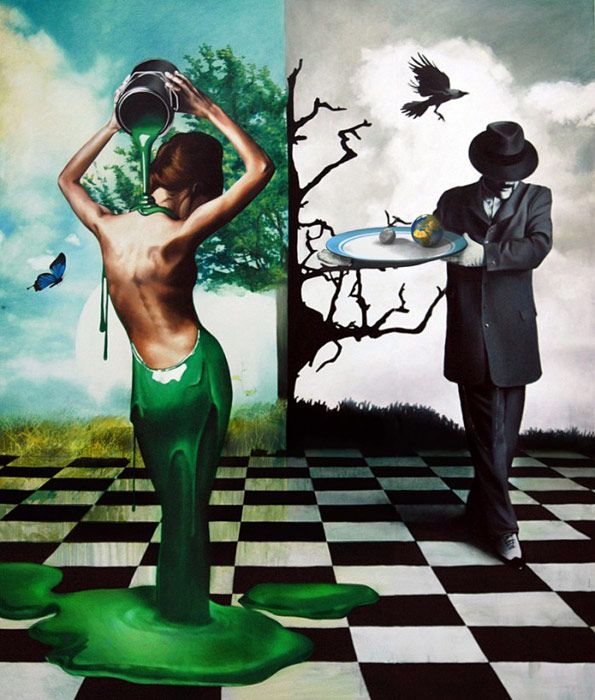 Q: Where do you find parts to build an old school bike?
A: My favourite way to source rare and weird old school parts is by networking with other old school BMXers on OZBMX.com.au (always go local if possible!), and other BMX communities around the world. But when that fails there's an awesome little store Stateside called rinienterprises.com, it might not look like much, but there's some rad gear hiding away in dark corners, heaps of which even arrives in original 80s packaging.

Q: It must be difficult to survive as an artist? Maybe as difficult for a Stockbroker to write lyrics to a song though?
A: Haha, I've got my fingers in enough creative pies to get by ok. After all, the 1% still thinks it's cool to buy art… maybe it constitutes giving to the poor? ;) 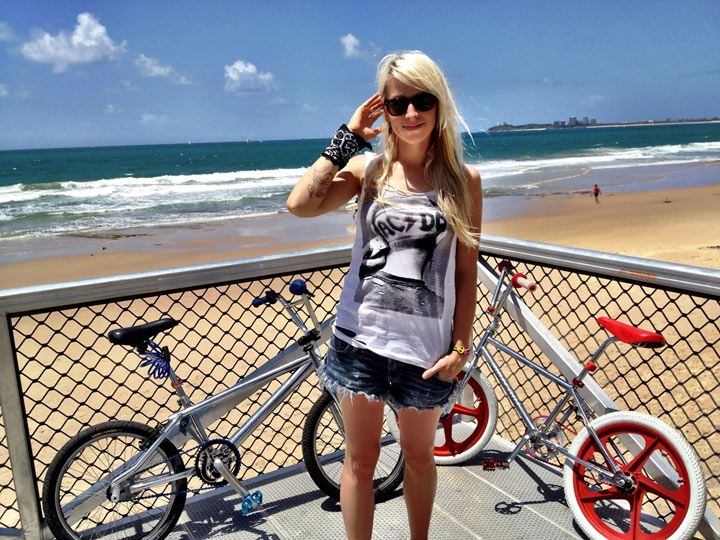 Q: Why do you think it is that so many good BMX riders come from Australia and New Zealand right now?
A: We're awesome, aren't we?! Super proud of Sarah Walker, what a star. Both countries are mad about their sport and there's a strong outdoors focus in the Australian and New Zealand lifestyles. New Zealand's international accolades in sport, per capita, are mad. I had the privilege of being in the NZ Youth Yachting team as a teenager and I can say that the training, coaching, nutritional and psychological support provided to us, just as 15-17year olds in the 90s was above and beyond. 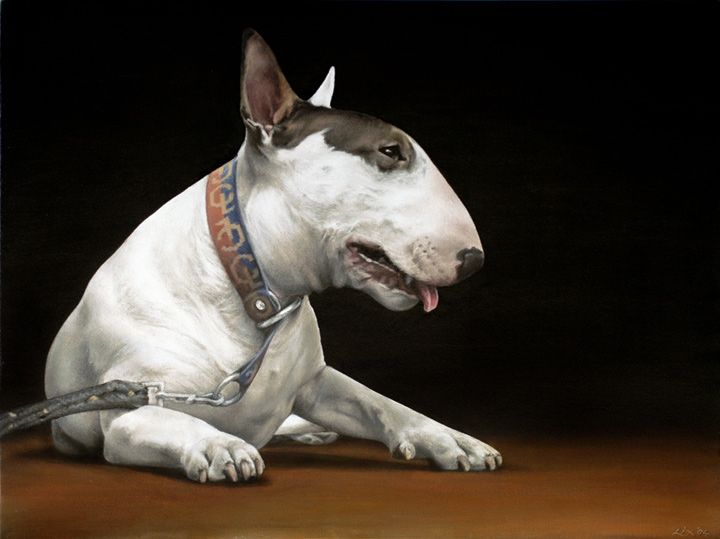 Q: What technique do you use to get that level of realism in your paintings?
A: I'm pretty non-traditional with my technique, as oil painters go. We were taught at art school to use thin layers (glazes) to build up form and light with oil paint, waiting for each to dry before applying the next. But I kinda threw that out the window early on in favour of a process with more instant gratification. I'm probably pretty hilarious to watch when I paint, I use my fingers and handfuls of rags, along with brushes, and get so lost in what I'm doing that I always end up with paint in my hair, up my arms and all over my face. Occupational hazards! 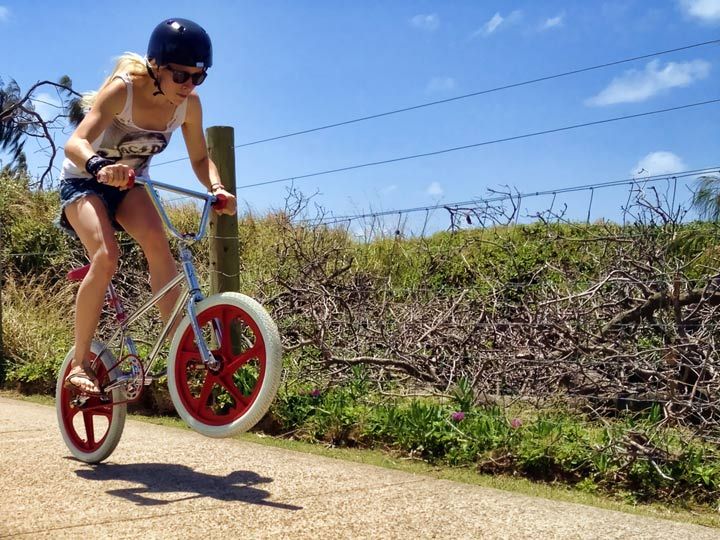 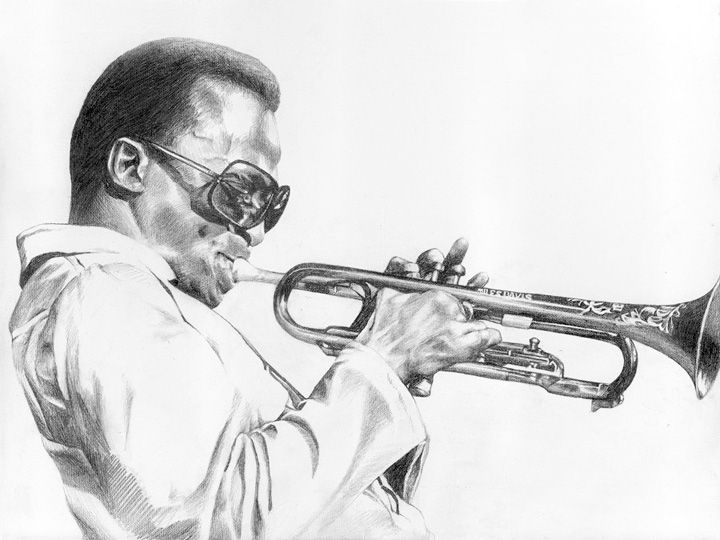 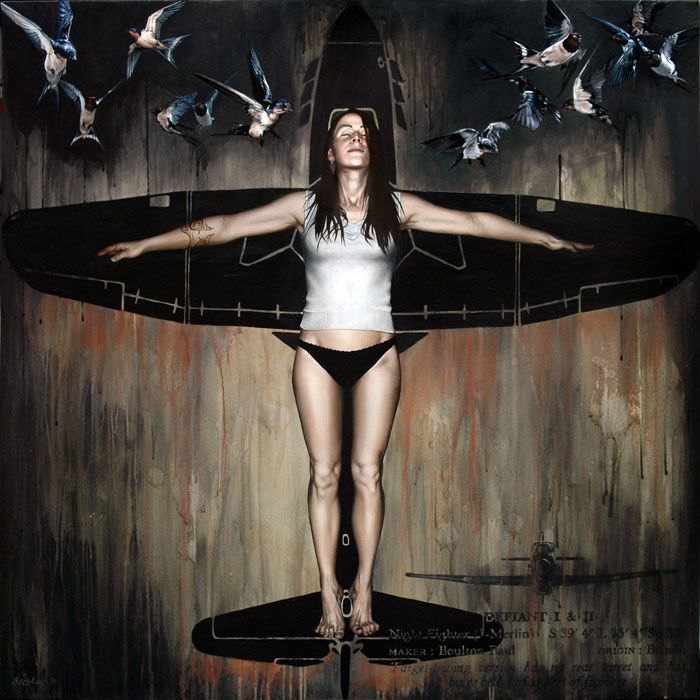 More in this category: « The making of a hub guard. By Phenix bikes Robin Fenlon and his GT40 project »
back to top