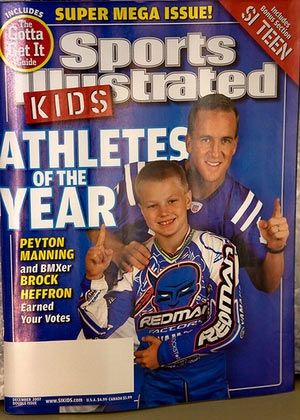 Brock Heffron from Gilbert, AZ was announced this weekend as Sports Illustrated for Kids 2007 “Youth Athlete of the Year”. Brock was featured on national television on the “CBS Early Show” Saturday morning where they unveiled the December cover of SI Kids featuring Brock posing with Superbowl MVP, Peyton Manning of the Indianapolis Colts. Brock flew to Indianapolis Colts Training Center earlier this month for a photo shoot with Peyton who is SI Kids “Athlete of the Year”. Brock was chosen out or over 6,000 athletes for his many athletic accomplishments in football, baseball, and BMX as well as outstanding grades in school.

Brocks father John Heffron was asked by SI Kids, what makes your son so special? John stated “Brocks desire to do what ever it takes in practice to be #1” this is the #1 quality that makes a great athlete, with this attitude Brock will achieve great success in everything he attempts.

More in this category: « Limited numberplates with all proceeds going to the injured All new 4 Bolt Chain Rings from Sinz + Cogs »
back to top