Written by  Bart de Jong
Read 5448 times
The NBL RM59 Tropical challenge race is taking place in Puerto Rico this weekend.  A whole bunch of BMX pros made it over to race and hang out. Robert de Wilde won 3 out of 4 classes. Congrats Afro Bob! 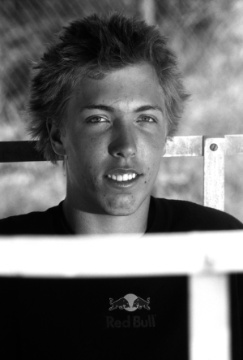 Here's the race report from the people at Formula:

dR’s trip started off on a bad note with his gear bag not showing up in baggage claim in Puerto Rico.  Donny’s brand-new Formula Solution Pro made the trip, but no clothes.  That meant no race gear – shoes, pants, helmet, gloves, or jerseys.  According to the airline his gear bag would make it to Puerto Rico at 4pm - Saturday afternoon.  So dR had no gear for practice either day and Saturday’s racing.  To make matters worse, dR had teammate Amanda Geving’s jerseys in with his gear and rain was threatening the race weekend.  dR missed Friday afternoon practice and with the help of a J&R jersey and some sweats, Donny was ready to ride on Saturday morning.

Amanda Geving made the most of the trip, battling hard with good buddy Kim Hayashi.  Amanda powered her way on to the podium both days with two second place finishes for the weekend.  Watch out, Geving is definitely a rider on the move, getting faster and faster every day.

Donny has been going super fast lately - always finding himself at the front of the pack.  Bad luck has kept him off the top of the podium lately, however, with some nasty spills.  Saturday was no exception.  Donny was battling with Cristian Becerine and Bubba Harris for the lead in Saturday’s Elite Men’s final but went down hard in the first corner, re-injuring a healing wound he got the previous weekend in Florida.  The injury was severe enough for him to sit out the Elite Open main.  Donny went back to the hotel that evening to regroup and get himself together for the next day.  Luckily, his delayed luggage arrived at the hotel as promised, and Donny felt like his luck was about to change.

Sunday was a different story for Robinson.  After his race gear arrived at the hotel the night before, Donny was ready to rock on Sunday.  Holding it together for the Elite Men’s main, Donny was once again battling for the lead and finished on the podium once again with a second to Robert DeWilde.  In the Elite Open main, dR pulled down yet another podium, this time with a third place.  Not a bad day for Robinson, who is looking to regain the consistency that carried him through the last half of 2005.  Next up for Donny is the ABA’s Sooner National in Guthrie, Oklahoma.

Round 2 of the 2006 NBL Pro series was held way down south to Puerto Rico. Puerto Rico is under the U.S. customs jurisdiction. Borders are open between P.R. and the U.S., and it seemed as the entire country invited BMX'ers to come down and race the RM59 Tropical National experience. With some of the nicest people you will ever find at a BMX national event, even rain or wind could not put a damper on the excitement of round #2 of the 2006 NBL Pro series. Here is how the 4 Double A Marketing riders finished up.

Cristian Becerine always is fast but in Barceloneta, he put it all together on Saturday and won start to finish in the Elite Men's Pro main. The ironic thing is that on Wednesday night, Cristian wasn't even going to go to the race, as he had been sick all week. Unfortunately on Sunday, Cristian had a bad crash in the semi and ended his good weekend.
Cristian's Sponsors include: Free Agent, Answer, Kenda, THE, Vigor Helmets, Oakley, Sun Ringle, Shimano, Tool Shed, Powerbar, BMXpros.com, OGIO, Cyto Sport/Cyto Max, and Thomson Seat Posts.

Dale Holmes kept his international fans happy with a appearance in Puerto Rico. Dale admiringly is in the early stages of his 2006 training program, but his experience and skills paid off for him as he was in the Elite Men's Pro Open main event both days. Dales consistency showed as on Saturday, he placed 3rd and stepped it up one spot on Sunday with a 2nd.
Dale's sponsors include Free Agent, KHS, Utopia Eyewear, Kenda, Sun Ringle, Thomson, Troy Lee Designs, S & M bars, THE Products, Shimano, Powerbar, Cyto Sport, and BMXpros.com.

Kyle Bennett was coming off of a very bad crash in Oldsmar, Florida the week before and wasn't sure if he was ready to race in Puerto Rico. Kyle made the trip and made the best of it, as on Sunday, he placed 3rd in the Elite Men's Pro main event.
Kyle's sponsors include Free Agent, KHS, Kenda, Fly, Bombshell, Sun Ringle, UGP, Thomson, Utopia Eyewear, THE Products, S & M bars, ATI, Shimano, Powerbar, Cyto Sport, and BMXpros.com.

Randy Stumpfhauser was also making his return from a crash, but his was at the Christmas Classic. Randy crashed in the Pro Main on Sunday, injuring his hand. Randy had to sit out of Reno and Oldsmar, but made it back still a bit sore for this weekend. On Sunday, Randy overcame his injury and was in the Elite Men's main event, where he finished up 8th for the day.
Randy's sponsors include GT Bicycles, Hyundai, ODI, Kenda, Tangent, Sun Rims, Bombshell, Fly Racing, Powerbar, CTI Knee Braces, OGIO, Tool Shed, SDG, Easton, S & M, Cyto Max, and BMXpros.com.

More in this category: « ABA goes live. Follow the Nationals online. Jason Richardson breaks femur in the Guthrie Pro Section »
back to top